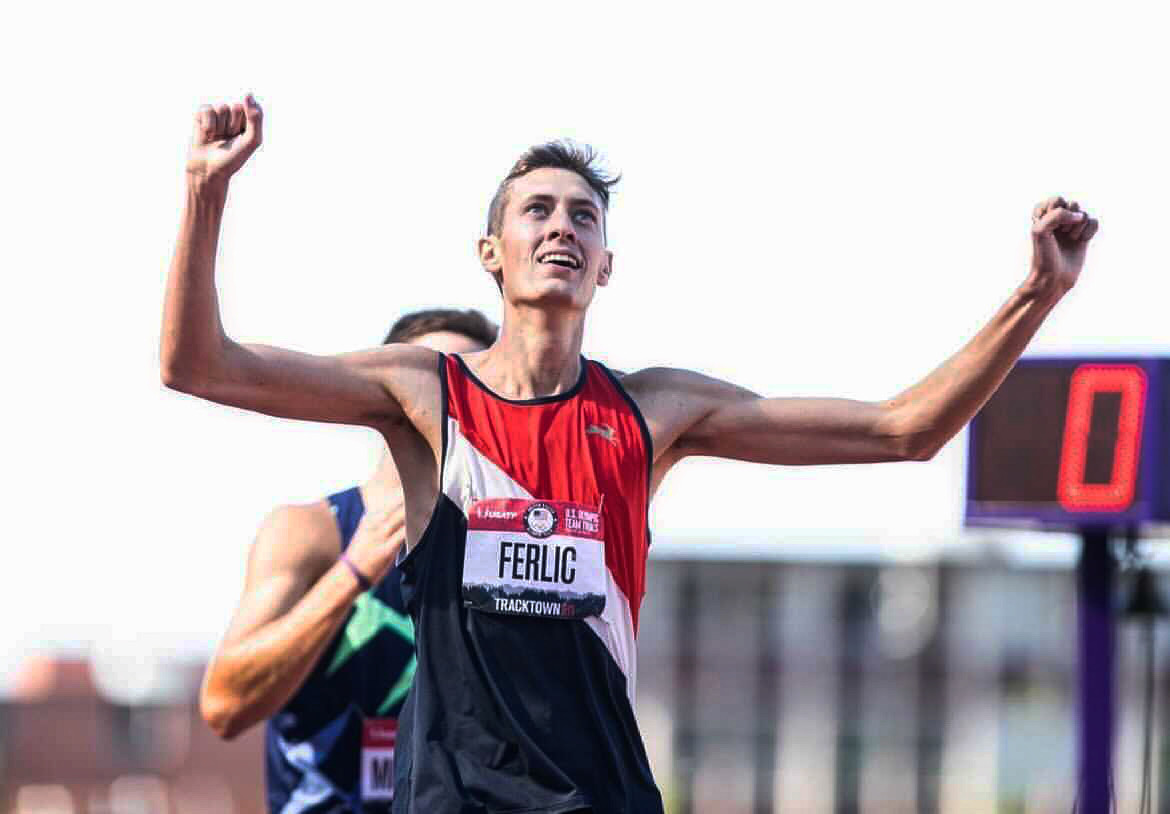 As the Summer Olympic Games draw closer, University of Michigan doctoral student Mason Ferlic is already on his way to Tokyo. But first, he is making a pit stop in Hawaii for a last week of preparation to compete in the men’s 3,000-meter steeplechase. 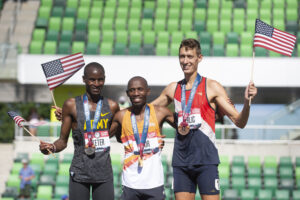 “I can only fly in at most five days before my first race, and I have to leave immediately 48 hours after my last race,” Ferlic said. “In Hawaii, I can begin to adjust to Tokyo time while I train. Normally, we would be in the country a week or two weeks beforehand and we’d have a training camp. However, team U.S.A. doesn’t want everyone together because of the (COVID-19) risk.”

Despite the restrictions, Ferlic couldn’t be happier and feel more confident and prepared—physically and emotionally. He took advantage of the extra time he got after the games were postponed last year due to COVID.

“I was fit, but I don’t think I was quite mentally prepared in the same way I was this year for the trials,” he said. “I wasn’t totally confident in my ability to make it. This year after a long break, I just came in with a renewed and refreshed mindset. It felt very much more centered, the goals and what I needed to do. I felt that it led into the rest of the season.”

The track and field Olympic trials were held in Eugene, Oregon, in late June. The steeplechase is a 3,000-meter obstacle race with four barriers—or hurdles—and a water pit. The race consists of seven laps, so runners must jump over a total of 28 barriers and seven pits. 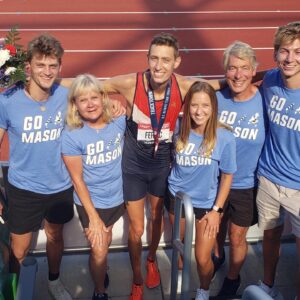 Ferlic was surrounded by his family, clad in blue, at the track’s edge in front of the final barrier, cheering like never before. He finished third—clinching a spot on the three-man U.S.A. steeplechase team headed to Tokyo.

“Having my family in the field was really special for them and me. They were wearing T-shirts saying ‘Go, Mason,’ and the audience knew they were my relatives,” he said. “After I qualified, everyone was congratulating them as well.”

On the morning of the finals, Ferlic said he had never felt so nervous before a race, but once the gun went off, he switched into race mode and focused on the immediate goal right in front of him.

“In the last lap, I knew I was in a position to get that third spot,” he said. “So I ran a really smart tactical race. I cleared the last water pit smoothly, got over the last hurdle, and then was in third. I was looking up at the scoreboard, and when I saw my name, I just felt this huge sense of relief and gratitude.” 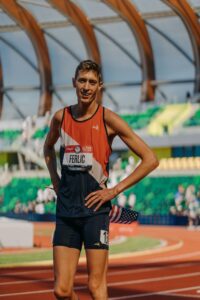 For Ferlic, the steeplechase is a fantastic sport: It’s all about being self-driven, disciplined and motivated.

“That’s why I fell in love with it,” he said. “It’s beautifully simple and also complex at the same time. Never count yourself out after one bad experience or one bad race. It’s a journey; give yourself time to reflect on it. You gotta be you, gotta stick with it, have some credit.”

At U-M, Ferlic was the NCAA steeplechase champion in 2016 and an Olympic qualifier that year. He was a five-time All-American and Big Ten champion in the steeplechase and long-distance running.

In the classroom, he studied aerospace engineering, graduating with a bachelor’s degree in 2015 and master’s degree in 2016. He is now a Ph.D. student in statistics and a graduate instructor in the College of Literature, Science, and the Arts. His goal is to work in the exercise and science field, solving mobile health problems through the use of wearable devices and biometric sensors to improve data techniques.

“The Ph.D. program aligned with my career goals and my general academic interest,” Ferlic said. “I work on the intersection of big data, health and performance. Having something else outside of the track makes me a better athlete and gives me a mental outlet. There are only so many hours I can train in a day; there are only so many miles I can run. I feel accomplished doing both things.”

While on summer break from school, the Minnesota native dreams of returning to U-M this fall with an Olympic medal. 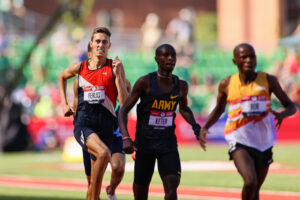 “I really have a shot. I never stopped believing in myself and my ability to do it,” he said. “Sometimes, people count you out, but I never counted myself out. Those entire four to five years, even if there were times when I was injured or wasn’t racing as well as I wanted to, I knew the magic, the spark, the fire and the ability were all there.

“I’m really proud of the Michigan connection. I was coached in college by Kevin Sullivan, who’s the current Michigan coach, who was coached by Ron Warhurst, who is now coaching me,” he said. “It’s just this whole intertwine of this Michigan tradition of Olympic-level runners and running training partners (like) Nick Willis, who was a Michigan alum. So it’s a very cool story of how Ann Arbor somehow became a mecca of elite distance running.”