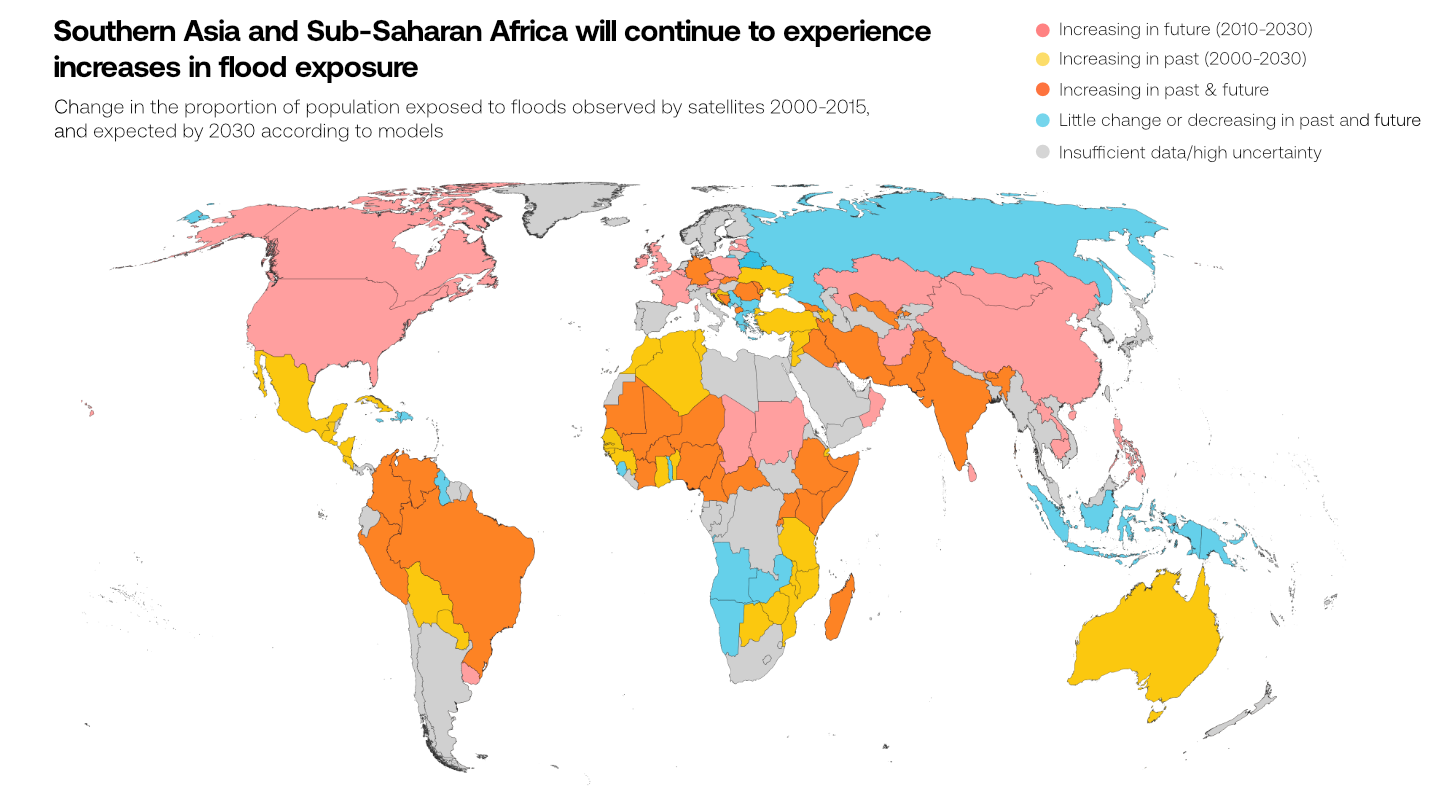 Southern Asia and sub-Saharan Africa will continue to experience increases in flood exposure in coming decades, according to the study led by Cloud to Street, a global flood tracking and risk analytics company, and including researchers from the University of Michigan and several other institutions. By 2030, the Cloud to Street model estimates that climate and demographic change will add 25 new countries to the 32 already experiencing increasing floods. Image credit: Cloud to Street.

New research in the journal Nature used direct satellite observations of floods to reveal that the proportion of the world’s population exposed to floods has grown by 24% since the turn of the century—10 times higher than scientists previously thought—due to both increased flooding and population migration.

This marks an increase of population inside flood-prone regions of up to 86 million people, according to a team of researchers led by scientists at Cloud to Street, a global flood tracking and risk analytics company for disaster managers and insurers.

“We found that economic development and people moving into flood-prone areas is significantly increasing the number of people exposed to floods in those regions. Furthermore, increasing flood exposure is rooted in underlying conditions that give vulnerable populations no choice but to settle in flood zones,” said study co-lead author Jonathan Sullivan, who earned a doctorate this year from U-M’s School for Environment and Sustainability.

“Without greater attention to land-use zoning and provisioning of affordable, safe housing alternatives for the poor who have little choice, it’s likely these trends will continue,” said Sullivan, an expert on satellite-imagery analysis who worked on the flooding project throughout his time at U-M and who is now a postdoctoral researcher at the University of Arizona.

Other key findings of the new study: 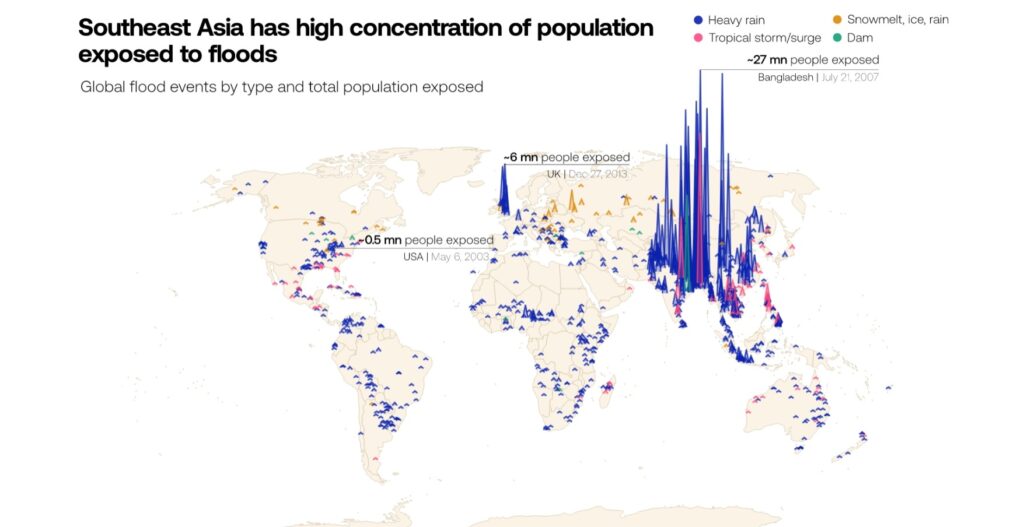 Southern Asia and sub-Saharan Africa will continue to experience increases in flood exposure in coming decades, according to the study led by Cloud to Street, a global flood tracking and risk analytics company, and including researchers from the University of Michigan and several other institutions. By 2030, the Cloud to Street model estimates that climate and demographic change will add 25 new countries to the 32 already experiencing increasing floods. Image credit: Cloud to Street.

Cloud to Street will openly host the database behind the Nature study, which it calls the Global Flood Database. The company describes it as the most accurate and largest observed-flood dataset ever produced, providing a new view into the true scope of flooding.

Powered by twice daily, global satellite imaging, the Global Flood Database has mapped and analyzed 913 flood events in 169 countries since 2000.

Most of the flood events in the database were caused by heavy rainfall. The other top causes, in order of frequency, are tropical storms or surge, snow or ice melt, and dam breaks. In the dam break category, the 2008 collapse of the Koshi Barrage in Bihar, India, left more than 3 million people homeless. In 2018, the opening of the Bagre Dam in Burkina Faso flooded thousands of hectares of agricultural land in Ghana, contributing to food insecurity. These incidents illustrate the increasingly deadly cost of failing infrastructure. 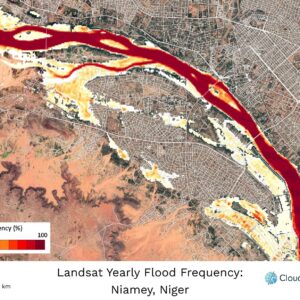 “Using satellite observation data of floods with improved spatial-temporal resolution will help policymakers understand where flood impacts are changing and how best to adapt,” said study co-lead author Beth Tellman, chief science officer and co-founder of Cloud to Street and assistant professor at the University of Arizona School of Geography, Development, and Environment.

“The Global Flood Database can improve the accuracy of global and local flood models and vulnerability assessments, increase the efficacy of adaptation measures, and deepen our understanding of how climate, land cover change and floods interact.”

Today, most flood maps, including those used by the U.S. Federal Emergency Management Agency, rely on modeling that simulates floods based on available ground data such as elevation, rainfall and ground sensors. These models are time intensive and can have substantial limitations, entirely missing flooding incidents in regions not historically prone to flooding.

In contrast, the Global Flood Database relies on satellite observations of actual flooding over the past two decades. This allows additional analyses of the scope, impact and trends of recent flooding. According to Cloud to Street, this approach represents a major advancement in the field of flood mapping and is essential to capture climate change’s accelerating, record-breaking disasters.

“We anticipate that some countries and regions may be surprised by flooding in the future,” Sullivan said. “These are countries where we didn’t observe increasing exposure to flooding from historical satellite data, but climate models predict increased exposure in the future.

“These countries are concentrated in Europe and North America—not the typical places we think of when it comes to unpreparedness for flooding. It’s not only low- and middle-income countries where projections are concerning, but countries like the United States or Belgium, for example, that may see flooding in places where land-use policies have not caught up to the reality of climate change.”

Cloud to Street describes itself as the leading authority on remote flooding analytics. It uses satellites and artificial intelligence to monitor flood risk and to track flooding anywhere on Earth in near real time. It combines data from more than 15 satellites as well as other, nonconventional sources to enable governments to leapfrog legacy flood information systems and to help insurers to accurately underwrite flood risk with new products such as parametric insurance.

Tellman and Sullivan are the co-lead authors of the Nature paper, with support from C. Kuhn, A.J. Kettner, C.S Doyle, G.R. Brakenridge, T. Erickson, and D.A. Slayback. The work is a collaboration between Cloud to Street Public Benefit Corporation; the University of Michigan School for Environment and Sustainability; Columbia Earth Institute; University of Arizona School of Geography, Development, and Environment; University of Texas Department of Geography & the Environment; Dartmouth Flood Observatory; INSTAAR at the University of Colorado; University of Washington School of Environmental and Forest Sciences; Google Inc.; Science Systems & Applications; and NASA’s Goddard Space Flight Center.

Funding was provided by Google through a Google Earth Engine research award and by NASA through award 80NSSC18K0426, 16-GEO16-0068, “Integrating Global Remote Sensing and Modeling Systems for Local Flood Prediction and Impact Assessment.”

Written by Cloud to Street