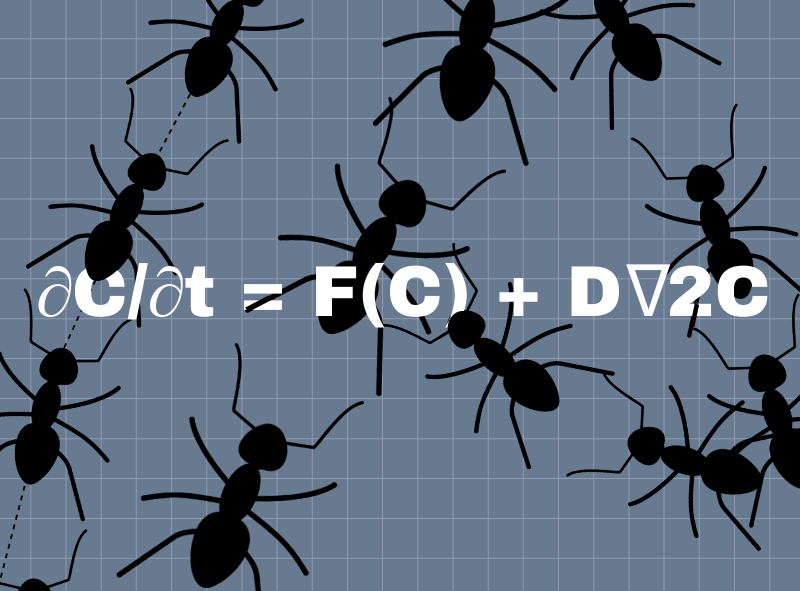 ANN ARBOR—What could Azteca ants in coffee farms in Mexico have in common with leopards’ spots and zebras’ stripes?

After two decades of analyzing the rise, spread and collapse of Azteca ant colonies in a coffee farm in Mexico, University of Michigan researchers have proven that the ant distributions follow a pattern named after chemist Alan Turing, who first described it in 1952, that is said to explain leopards’ spots and other patterns in nature.

“The same equations that Turing used for chemistry, we can use in ecology,” said John Vandermeer, a professor in the U-M Department of Ecology and Evolutionary Biology and first author of a study in the December issue of BioScience. “Those equations say you should get spots of predators and spots of prey in a system, and we’ve proven you do.”

The finding, he says, helps shed light on the complex agroecological system of coffee farms and how the “control from above” (focused on pests) model is also more complicated than a predator-prey relationship. The system includes a complex community of predators, parasites and diseases that interact with each other in complicated ways that eventually generate a self-organized system that exerts effective control over the herbivore.

“This is an important finding because it shows how organisms in nature are embedded within a complex web of interactions and, therefore, the simplistic pest management approach of ‘one pest, one natural enemy’ may not be the most appropriate one for pest management,” said co-author Ivette Perfecto, the George W. Pack Professor of Ecology, Natural Resources and Environment at U-M’s School for the Environment and Sustainability.

“Rather, a complex systems approach that accounts for nonlinearities and networks of interactions is what is needed.”

Turing explained the creation of nonrandom patterns in chemistry by observing chemical reactions and how they are destabilized. A chemical reaction is stabilized by the balance of an activation and repression process. Then there’s diffusion: a drop of ink in water eventually diffuses and can’t be separated from the water. But, Turing observed, if the repression force diffused at a greater rate than the activation force, a nonrandom pattern would develop.

“Turing figured that if you took this reaction process, you can put together two forces that are stabilizing themselves and you put them together and that destabilizes the whole system, forming patterns,” Vandermeer said. “Something very similar happens in ecological systems: the predator is eating the prey and the prey’s population goes down, and then the predators’ population goes down, that’s a regulating thing. When you have diffusion—in biology we call it migration—the predator moves in space and the prey moves, too.”

Vandermeer and Perfecto looked at data they collected in an organic coffee farm in Chiapas, Mexico, mapping the distribution of shade trees containing nests of Azteca sericeasur ants. While there are between 7,000 to 11,000 shade trees in the plot depending on the year, only about 700 have Aztecas on them. Each nest has anywhere between 10 to 20 queens.

Phorid flies find these clusters, parasitizing the ants by planting an egg on the ant’s head. Larvae will develop until the ant’s head falls off and a new fly emerges, repeating the cycle. As the local population of ant nests builds up, spatial clusters are formed and become larger, and so does the population of phorid flies, which will in turn act as a repressor in the system, resulting in the patchy distributions of ants similar to the leopard’s patches.

“Turing was talking about his chemicals and we’re talking about ants and flies,” Vandermeer said. “We predicted that our ants and our flies should form these little clusters and we found that they do.”

The complexity of farming coffee

In their study, the researchers explored the complex relationships between predators, prey and their environment, including the green coffee scale, a relatively benign coffee pest that rarely reaches pest status; the Azya orbigera, a predatory beetle that feasts on the scale; and the Azteca ant, which protects the scale from the beetle.

Under protection from the ants, the scales effectively have a refuge from the beetle predators and they increase dramatically in numbers. With such high local population density, a fungal disease takes over and the scale insects decline rapidly. Thus the combination of a predator, a refuge in the clusters of ant nests and a fungal disease keeps the scale insects under control.

And then there’s the coffee rust, which has decimated coffee farms across Latin America but remains fairly controlled in Puerto Rico. The rust is spread by spores in the wind, but the same fungus that causes the disease in the scale insects, is also an antagonist of the rust, complicating the situation considerably.

The researchers warn about the temptation of providing simple answers to farmers seeking solutions to perceived problems in their farms—for example, by getting rid of the shade trees that house the ants.

The same can be said when it comes to rust, he says. Coffee rust spreads by spores that are taken by the wind and a canopy of shade trees above the coffee acts as a windbreak.

“So if you take the shade trees out of the system, you get the wind in the system, and with the wind brings the spores,” Vandermeer said. “Since it’s a complex system, it requires a more holistic approach to understand and manage, and there’s more potential for surprise.”